Recently, Fei Wang (the first author), a PhD candidate of the School of Oceanography, Shanghai Jiao Tong University, and her co-supervisor, Weiwei Ding (corresponding author) published their latest research results online in Marine and Petroleum Geology, entitled: “How did sediments disperse and accumulate in the oceanic basin, South China Sea”. Based on multichannel seismic profiles with constraints from IODP Expedition drilling results, the recearch group semi-quantitatively constrained the sedimentary processes of the South China Sea oceanic basin and explored the controlling factors and possible sediment sources.

Quantitative study of the sedimentary process and analytical prediction of the potential sedimentary provenance are keys to characterize the “Source- to- Sink” process in East Asia (Fig. 1A), as well as to improve our understanding of the integrated effects on regional and local tectonic events, climate change, Asian monsoon, and eustatic fluctuation, etc. The South China Sea (SCS), as one of the biggest marginal seas in the West Pacific, is not only the crucial pathway for transporting terrigenous materials from Eurasia to the western Pacific Ocean since the Early Oligocene, but also the dominant accumulation and preservation place as a result of limited material exchange between the semi-closed oceanic basin and the open ocean since the Middle Miocene (Fig. 1B). Based on geological interpretations of more than 30 multichannel seismic profiles covering the whole SCS oceanic basin with constraints from IODP Expedition drilling results (Fig. 1C), the research group calculated the sedimentary budget of the oceanic basin since the Oligocene on a million-year geological scale.

Sediment isopach maps in different geological time were reconstructed to understand the controlling factors dominating the Cenozoic sedimentary accumulation and dispersion process, as well as the possible sedimentary provenances (Fig. 2A-F). Results show that the sediment budget of the whole oceanic basin increased gradually with time, although the rate has not been consistent over time (Fig. 3). It was complicated by regional tectonics, including the spreading of the SCS, the uplift of the Tibet Plateau and Taiwan, changes in the Asian monsoon, rerouting and organization of the river systems, and sea level changes (Fig. 3). Submarine channel/canyon systems developed in the continental margin acted as the major conduits for terrestrial sediments discharging into the oceanic basin.

Two decrease trends in sediment accumulation rates occurred were observed in the Southwest Sub-basin during the Late Miocene, and in the Northwest Sub-basin during the Pliocene. The former might be related with the local rifting event in the Mekong Shelf, which trapped most of the terrestrial input. While the later was due to the retreat of the Central Canyon in the Late Pliocene.

Sediment isopach maps indicate that the sediment accumulation was dominantly in the northern flank of the SCS oceanic basin before the Late Miocene, with the depocenters generally distributed at the mouth of the channel/canyon systems and slope foot area near basement highs; the main depocenters gradually migrated to the southern flank of the basin since the Pliocene (Fig. 2E). This is likely due to an increase sediment from the Mekong River and the high sea level. An exception is the development of a new depocenter in the northeast related with the Taiwan orogeny (Fig. 2F). The primary sediment provenances include the South China, Tibet Plateau, Indo-China Peninsula, and Taiwan Island, with minor contributions from the Hainan Island, Palawan, Luzon Islands, as well as local basement highs developed on the continental margin.

The research was funded by the National Natural Science Foundation of China (Grant Nos. 42025601, 91858214), and the Leading Talents in Scientific and Technological Innovation Project of Zhejiang Province (No. 2019R52034). 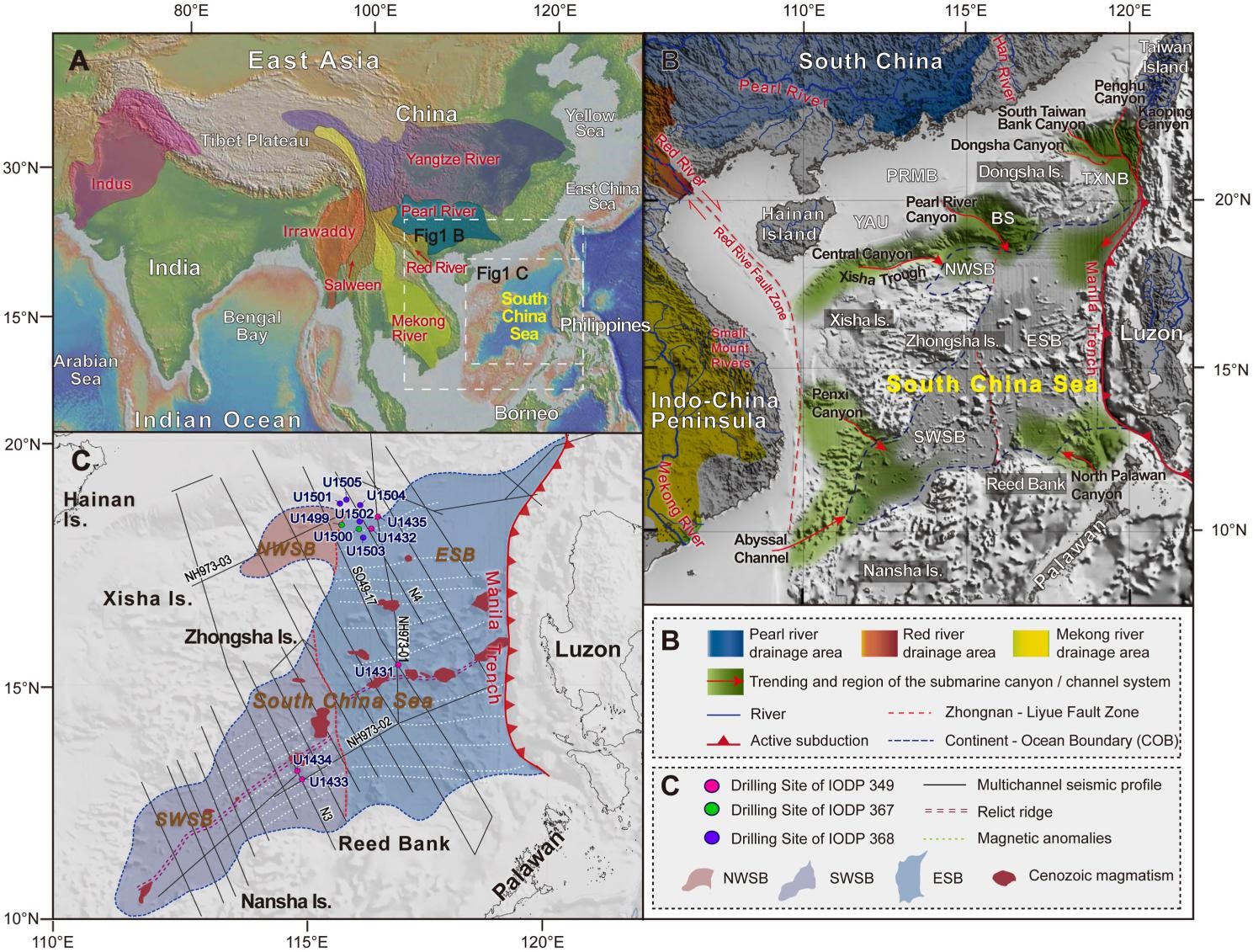 Fig. 1 Maps show (A) the major drainage systems in Eurasia and the location of the South China Sea (SCS) (after Clift, 2006); (B) the main geomorphology map of the SCS. Major submarine canyon systems in the SCS are marked; and (C) the main tectonic units of the SCS. The distribution the multichannel seismic profiles, the drilling sites of the IODP Expeditions 349, 367 and 368, and the magnetic anomalies (Li et al., 2014) in the study area. 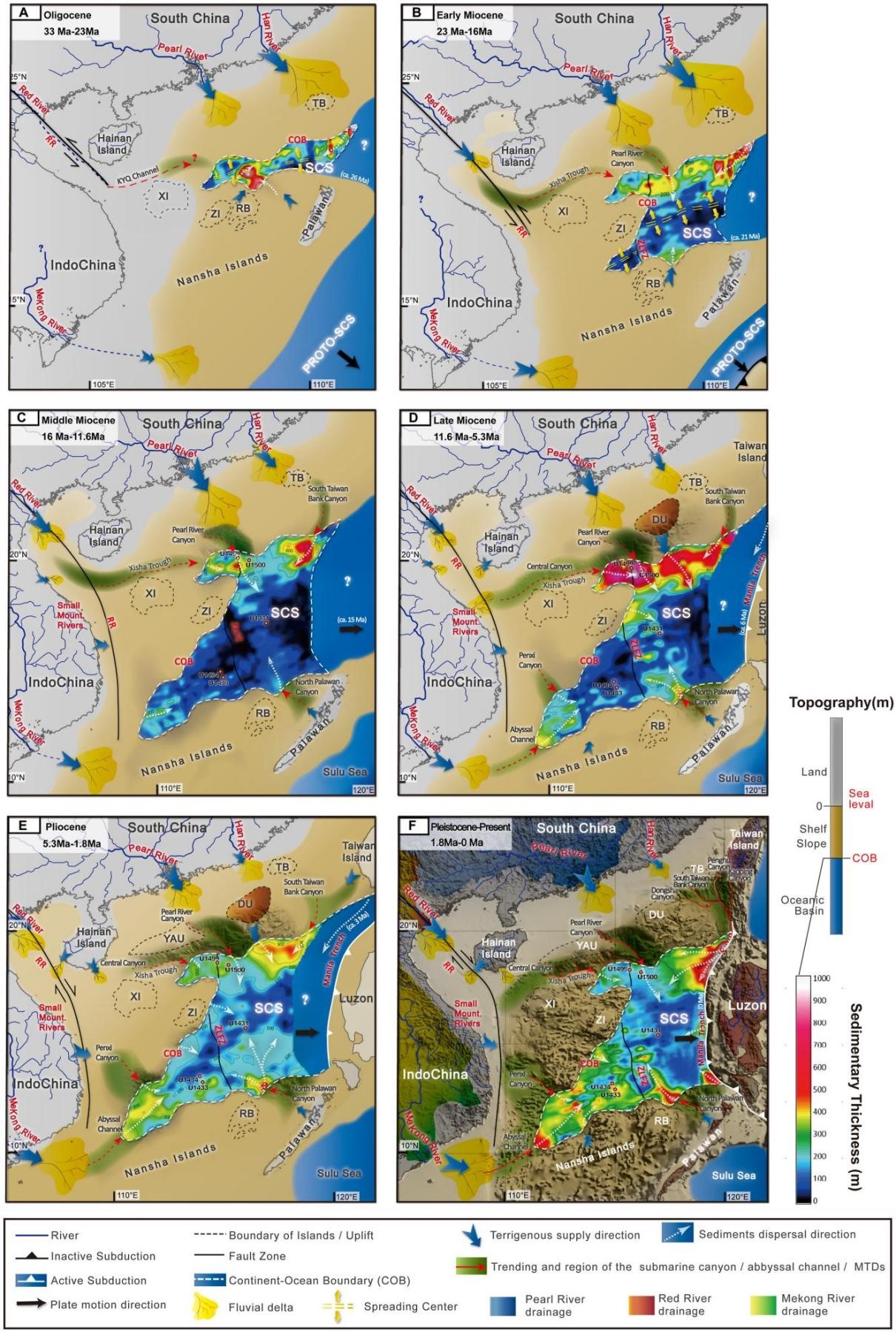 Fig. 3 Sediment budget changes of the SWSB, NWSB, ESB, and the whole oceanic basin of the SCS (OBSCS), as well as the combination of the controlling factors for the “Source-to-Sink” sedimentary process in SCS. Controlling factors include the major submarine channel/canyon systems; the drainage system input the SCS; the major tectonic events occurred both in and around SCS; the climate changes, and the sea level changes of the SCS area. Please refer to the original article for details in the figure.